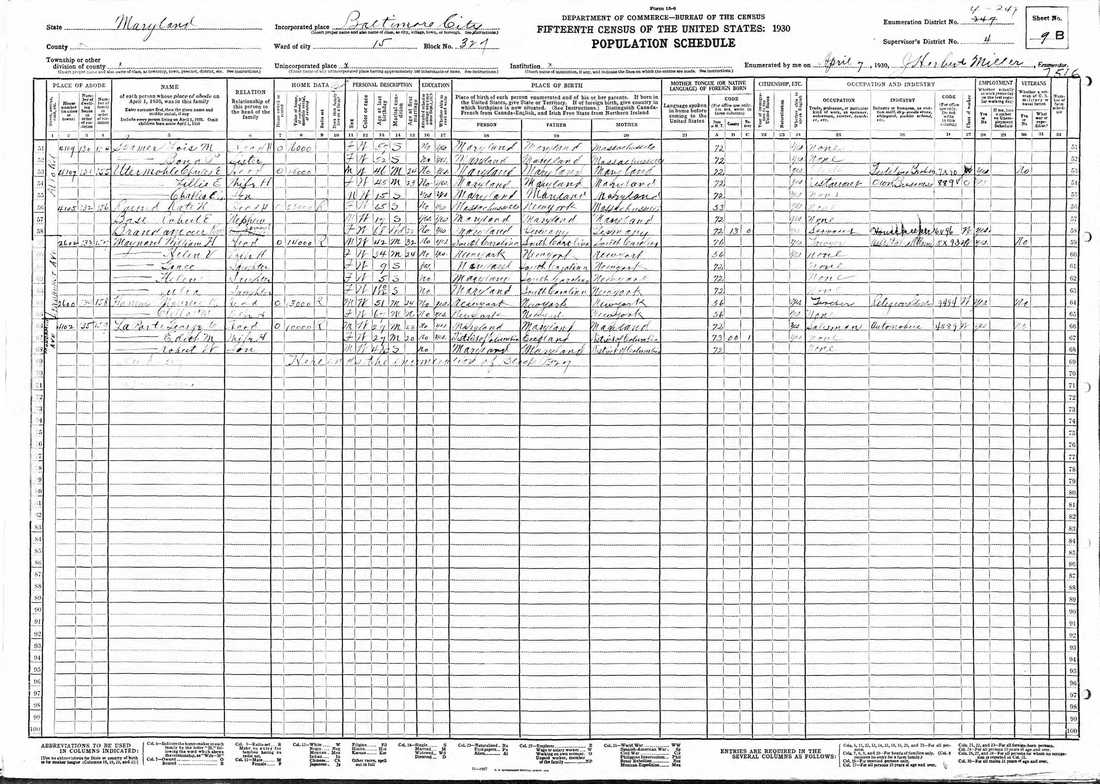 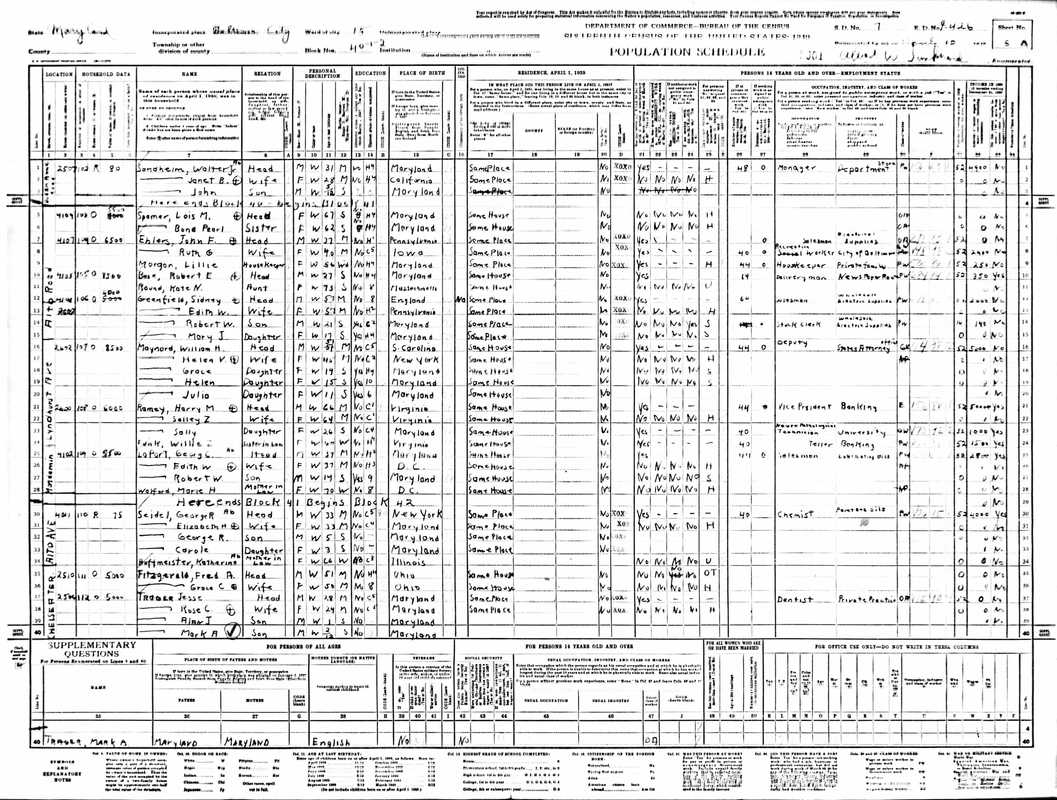 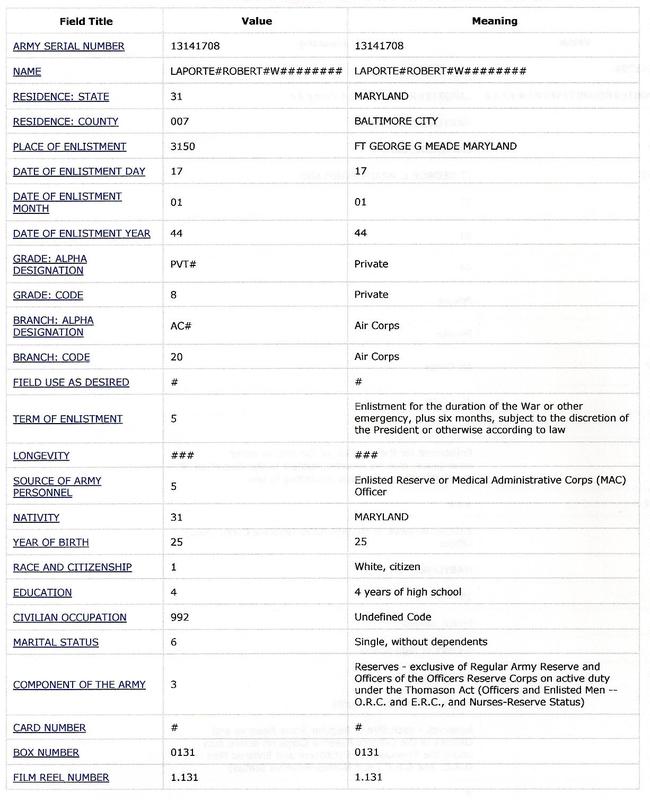 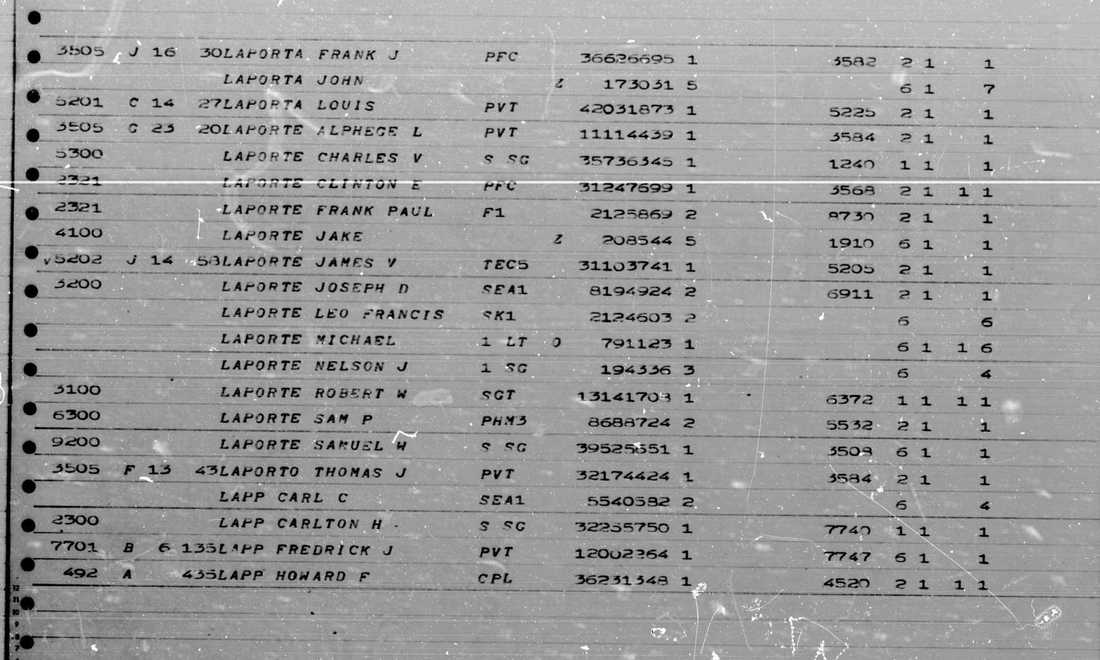 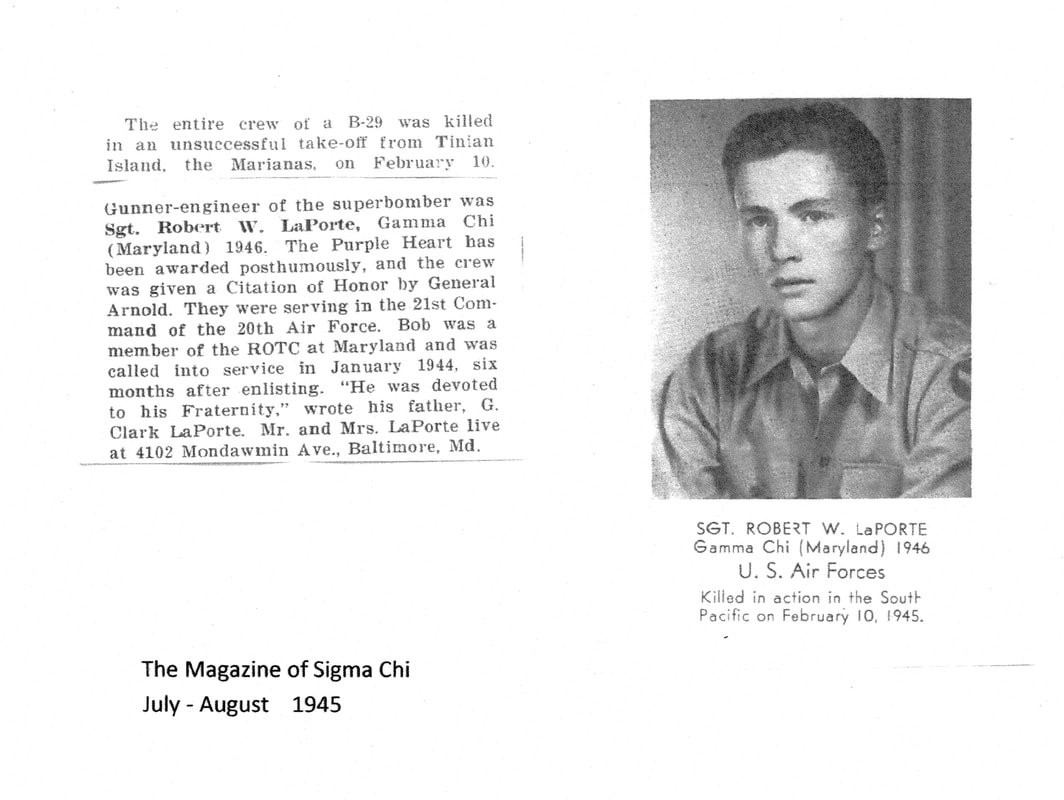 The July-August 1945 issue of the magazine of Sigma Chi. Courtesy, Noah Phelps. 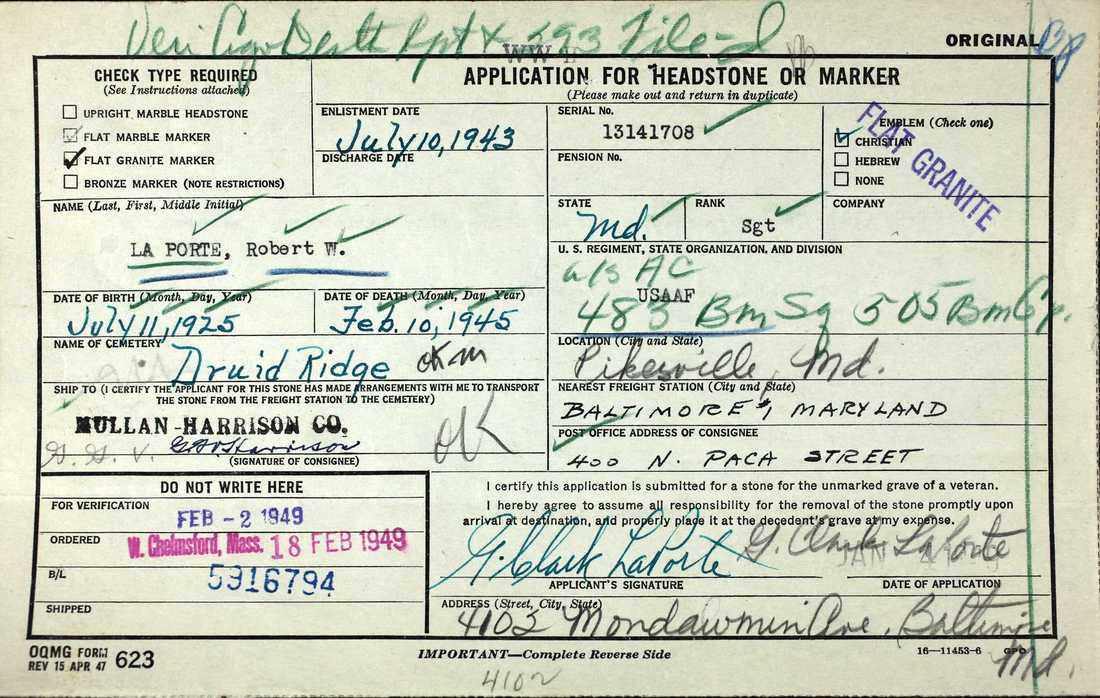 LaPorte Headstone Application.
Shortly after this webpage went public, I received an e-mail from a Gentleman named Barry DesRoches who sent me the following regarding Robert LaPorte:

"James I stumbled across your website this morning.  It just so happens I am part of a group that did a fair amount of research into Robert LaPorte.  I’ve copied Bob Bryer here as he might also provide some assistance.  Bob James has a website dedicated to the crash of

He was a member of the Sigma Chi fraternity at the University of Maryland.  After the war a plaque his name and the names of 7 others lost in the war was installed over the chapter house mantle.  Years later when the house fell into disrepair the plaque was stolen.  When we procured a new house for the chapter I met a brother from “Bob’s” era, Seth Preece.  He wanted badly to see the plaque and several of us were heartbroken that we couldn’t locate it so we had it recreated and installed in the new chapter house.

I will try and take a photo of the miniature plaque I keep in my office to remind me of the sacrifices of Bob and those like him and forward that a little later on.

Bob’s case was of particular interest to me as my father served as a Radar Operator on a B29 (the Purple Shaft) on Tinian.  In fact his was the first plane that landed on the newly constructed airstrip on December 21, 1944.  They later almost had to ditch due to engine problems and their crew helped determine that the dust was choking out the engines.  As I’m getting too caught up in this I will send you more later I looked and my Dad’s plane flew on that mission.  Took some flak hits – scared the crap out of him….

I’ve attached Seth’s info on Bob LaPorte that we got a few years back.  Seth served in Europe and he and Bob would regularly correspond and always sign off with “I’ll see you back at the house”.  Hence the very moving “I’ll know Bob made it back to the house”

We reinstalled the plaque around Veterans Day in 2014 I was able to get the ROTC involved and we had quite an impressive little ceremony.

I don’t know that any of this is at all useful for your work on the site – but at least it lets you know the memories live on and will keep living on and that one of the crew members who was lost has been very much in people’s minds all these many years later.

I will get you a photo of the real plaque as it is installed today and some photos of the installation ceremony and I think that Bob who I copied here may have some pics of the ceremony dedicating the plaque." 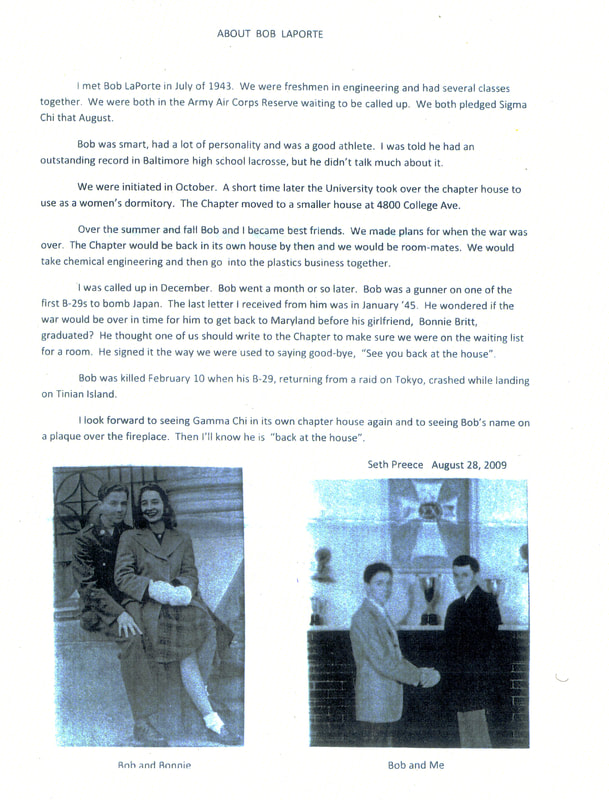 Courtesy, Seth Preece. Regarding the error above, about the B-29 returning and crashing on Tinian after a mission, Seth responds, "I relied on the memory of a Tinian veteran I ran into fifty years ago who thought the crash had occurred on the return." 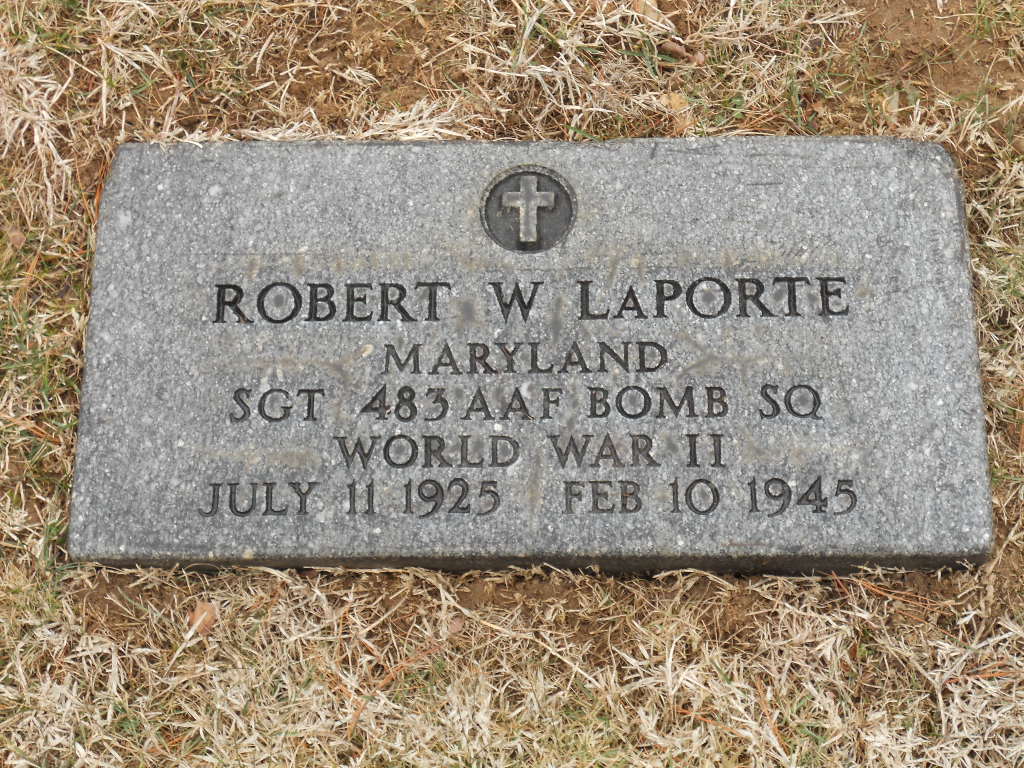